Money markets showed elevated yields that have only contracted marginally in January.

Equities rose strongly in January after a battering in December. Materials and miners performed well as commodities rose.

The AUD was supported by higher commodity prices.

The Australian data has been mixed over the past few months. And dwelling prices continue to fall. The bright spot is the labour market, where jobs growth remains strong and the unemployment rate is inching lower.

The Australian OIS rates have moved to price in an even greater chance of a rate cut in the coming year. However, these expectations remain more of a late 2019 or early 2020 story.

Across the developed market rates world, yields have finished near their lows in January. Markets have pushed back on the bounce in equity markets and have been firmly forward looking on a view that the rate hike cycle in the US has come to an end. As January closed, the more dovish Fed meeting justified the market pricing. The expected inversion of US rate curves has stalled for now. Carry trades may well move back in vogue given the Fed position.

This is also important for other markets. Global macro type trades have favoured a paid US rates vs received other markets. Cross market traded might start to lose favour given this new backdrop.

USD swap spreads, which have largely been benign in recent months, narrowed in the 10Y sector, flattening the spread curve.

In the Australian market, OIS pricing continued to lean against RBA views that the next move in policy rates will be higher. Further out of cycle rate hikes by the banks as funding cost increases were passed on as well as soft housing data are trumping the RBA’s optimism. Both labour force and CPI data did not provide a reason to consolidate pricing and indeed CPI reduced market pricing for cuts, albeit until the FOMC delivered its coup de grace. 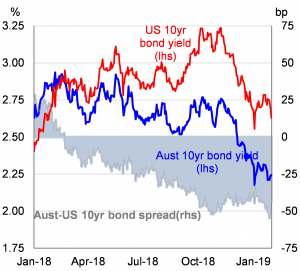 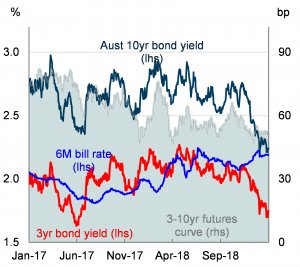 January was dominated by the continued impasse on the funding of Trump’s wall between the US and Mexico and consequently all bar the last couple of days, the US government was shut for the month. A problem that may resurface given the temporary nature of the re-opening. Brexit and trade headlines continued to occupy the narrative, but the tactical impact on A$ credit appeared negligible. At month’s end the Fed released its latest statement, which carried with it a noticeably more dovish tone than previous statements.

January saw 44% of the S&P 500 reported Q4 results, with aggregate sales of +6.2% on the pcp and aggregate earnings of +13% on the pcp. Optically reporting season so far has seen solid growth numbers, however there has been pockets of stress surface, mainly on the back of bell-weather names disappointing, which gave markets moments for pause. Despite the persistent headlines and lack of tangible progress in the prevailing risk points, markets (risk) continued to rally nonetheless. The S&P 500 and DOW closing the month up around +7.9%, the strongest monthly gain in three years.

After slumping in December, global sharemarkets began recoveries from their lows in early January with gains extending over the month. Investors continued to be fixated on developments in the US-China trade dispute as well as UK Brexit, US bank earnings reports and the US Government shutdown. Higher oil prices provided support for companies in the energy sectors.

In the first week of January, global markets were mixed in volatile trade. The US Dow Jones slumped 660 points on January 3 after Apple’s first sales warning in 12 years. But the Dow rebounded 747 points on January 4 in response to data showing a 312,000 lift in US non-farm payrolls for December. US markets rose 0.5-1.6 per cent in the first week of January, and Europe also lifted (German Dax up 2 per cent) but the Australian ASX 200 fell 0.5 per cent.

In the second week, global sharemarkets posted healthy gains on optimism about US-China trade negotiations. And on January 10, US Federal Reserve chief Jerome Powell reiterated that the Fed can be patient on future rate hikes. The Dow rose on four of the five days, lifting 2.4 per cent while the ASX 200 was up by 2.8 per cent.

In the third week of the month, global markets posted more gains, generally between 1.5-2.0 per cent. The Dow Jones again rose in four of the five days, lifting 3 per cent, while the ASX 200 rose 1.8 per cent and the German Dax lifted 2.9 per cent. On January 15, the UK Parliament rejected the Brexit deal but Australian and US markets rose. Over the week shares in US global investment banks were generally higher in response to earnings results.

In the fourth week of January global sharemarkets were generally flat, except the UK FTSE, down 2.3 per cent on uncertainty about Brexit. US shares fell by between 1-2 per cent on January 22 as investors digested a downgrade in IMF economic growth forecasts and weaker Chinese economic data. But US shares rebounded the next day on good earnings data.

In the final four days of the month, (January 28-31) global sharemarkets were mixed. But on January 30, US sharemarkets posted solid gains in response to positive earnings results from Apple and Boeing and the rates decision from the Federal Reserve. The Fed left rates unchanged but pledged to be patient in deciding the next move in rates. The Dow rose 435 points or 1.8 per cent.

After the CAD, AUD was the strongest performing G10 currency in January seeing its trade-weighted index rise by 1.5%. Rising Australia commodity prices helped initiate the January move and would remain a consistent theme throughout. However the more important catalyst was a 4 January speech by the Fed Chairman Jerome Powell which appear to emphasise downside risks to US inflation.

AUD buying reached a peak on 11 January on growing optimism regarding US-China trade talks as US Treasury Secretary Mnuchin announced an official trade meeting for end-January. The AUD was also helped by a surprise improvement in December retail sales, and further comments from the Fed’s Clarida emphasising a more ‘patient’ policy approach.

AUD outperformance was not a one-way trade however. While played-down by the RBA monetary policy statement 8 January, investor concerns regarding the Australian property market were beginning to impact the policy rate outlook. Such concerns were confirmed by weaker investment and owner-occupied house lending on 12 January undermining AUD. Tumbling consumer confidence, US-China trade tensions, and weaker China data all added to the more AUD gloomy tone seeing AUD/USD reach a 3 week low on 24 January. 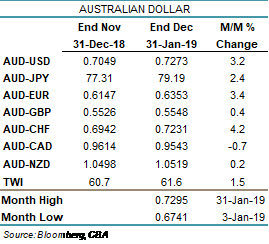 The CBA commodity price index decreased ~6.0% in January on the back of higher iron ore and oil prices.

Iron ore prices rose sharply towards the end of last month following a tailings dam collapse at Vale’s Feijao mine in Brazil. While the mine only accounts for ~0.5% of the seaborne iron ore market, the ramifications could be larger. The company has already outlined plans to decommission 10 of its upstream tailings dams over three years, sidelining ~2.5% of the seaborne iron ore market in the process. However, Vale believes it has enough spare capacity to partially offset any lost output. Despite Vale’s guidance, markets are justifiably concerned that Vale’s iron ore production could remain lower for longer. Those concerns stem from the imminent response of Brazil’s regulators, who will take into consideration that the dam collapse at Feijao is the second such disaster Vale has been involved in since late 2015.

Oil prices outperformed other major commodities for most of January. Prices rose on demand hopes as US-China trade talks showed positive signs. However, oil prices also gained on evidence of ongoing compliance with the OPEC-led supply deal to sideline ~1.2% of global oil supply in 1H19. The most recent bullish data print was US oil imports from Saudi Arabia, which fell to the second lowest level since 2010 last week.

Gold also saw a late rise in January. Prices gained sharply following the FOMC removed its policy guidance of “some further gradual increases” and replaced it with a statement that they will be “patient” in assessing its next change to the Funds rate. The dovish tone increases the appeal of gold relative to US-interest bearing securities. 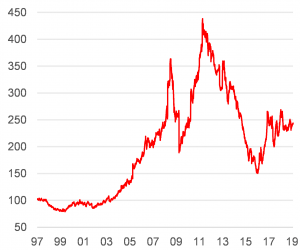 Dwelling prices in Sydney are now off 12.3% from their peak in mid-2017, taking prices back to mid-2016 levels. The current Sydney downturn is now one of the largest experienced, with the size of the price fall only larger for the 1982 downturn. In Melbourne, prices are off 8.7% from the peak, taking values back to early-2017 levels.

The leading indicators of dwelling prices are pointing to further falls. Auction clearance rates are very low, the flow of credit has slowed to both owner-occupiers and investors, and foreign buyers have stepped back from the market. We expect further dwelling price falls this year, with prices in Sydney and Melbourne expected to drop by the most. We also expect small decline in Brisbane, Perth and Darwin in 2019.

Dwelling sales volumes are low which has implications for the broader economy. Firstly, low sales volumes and lower sales prices are reducing stamp duty revenues for the state governments. Secondly, lower sales volumes tend to reduce the amount that people spend on new furnishings, fittings and white goods. Growth in sales volumes has declined for these items and there is also heavy discounting in these goods as retailers try to keep their market share.

When we last heard from the RBA back in December they seemed fairly relaxed about how the dwelling price downturn was playing out, with the broader economy looking in good shape. Since then we have seen the labour market continue to improve but we are expecting only a modest rise in consumer spending in Q4 after a soft outcome the previous quarter. Our analysis here shows some tentative evidence of a negative wealth effect.

Next week’s RBA communication with provide an important update on their thinking related to the housing market. In particular, Wednesday’s speech by Governor Lowe and the Statement on Monetary on Friday will give the RBA chance to outline their views. 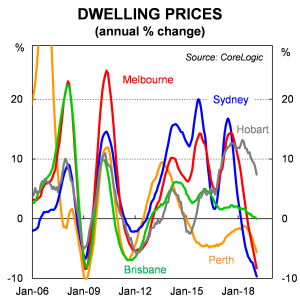 This information was first made available to CBA clients on 1 February 2019 in a CBA Global Markets Research report publication titled, ‘January Month in Review’.

This document has been prepared for general information purposes only and is intended to provide a summary of the subject matter covered. It does not purport to be comprehensive or to give advice. The views expressed are the views of Colonial First State at the time of writing and may change over time. This document does not constitute an offer, invitation, investment recommendation or inducement to acquire, hold, vary, or dispose of any financial products.

Colonial First State has given Arco Advisory its permission to reproduce the information, opinions, and commentary contained in this document.

This document may include general advice but does not take into account your individual objectives, financial situation or needs. You should read the relevant Product Disclosure Statement (PDS) carefully and assess whether the information is appropriate for you and consider talking to a financial adviser before making an investment decision. PDSs can be obtained from colonialfirststate.com.au or by calling us on 13 13 36.

Past performance is no indication of future performance. Stocks mentioned are for illustrative purposes only and are not recommendations to you to buy sell or hold these stocks.

This document cannot be used or copied in whole or part without Colonial First State’s express written consent. Copyright © Commonwealth Bank of Australia 2019.